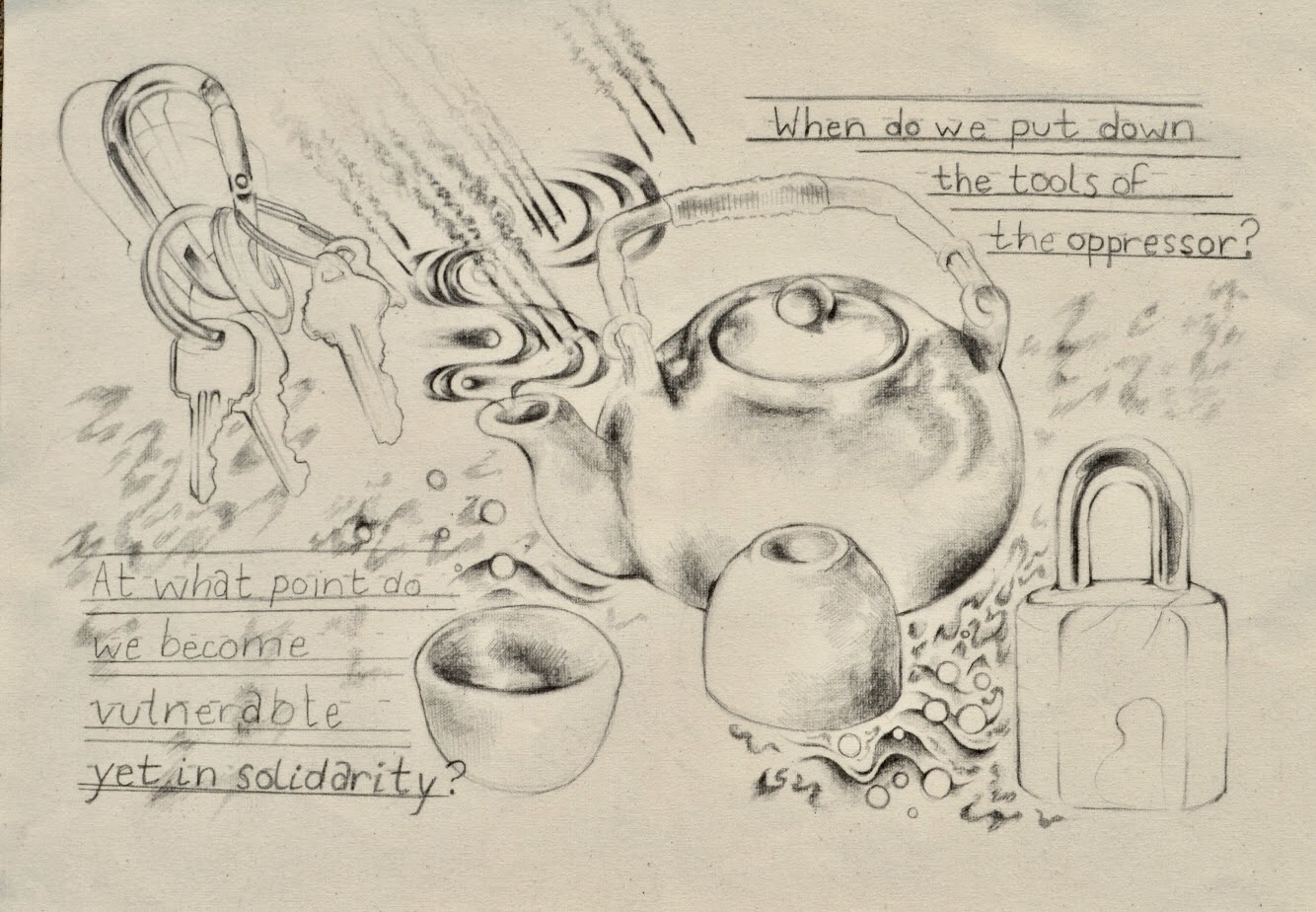 During times of stress and turmoil, I find comfort in knowledge, understanding, and reflection. From the beginning of the pandemic, I found myself at odds with my creative practice. As a student, I felt like I was violently separated from my community of artists. I realized that communal studios and average life at my high school was something that deeply informed my practice. My inspiration and drive to create work suffered. I felt that in this particular work, I was slowly re-emerging into my creativity and willingness to witness. During the Minneapolis uprisings, I spent my time working with my peers and elders to understand and dismantle the racism and anti-blackness within our small community. I looked to previous Black leaders and revolutionaries to both verbalize and understand the uprisings. I turned to Wretched of the Earth, by Franz Fanonzz–a book that investigated the harmful effects of colonialism and the broader movement to decolonize communities and systems in the 1960’s. The text remains relevant and serves as a handbook and a reference to vocalize the pain and often wordless traumas of colonialism. Upon reading it, I began to reflect on the systems of oppression that Asian Americans benefit from–from the myth of the model minority to drastic and violent assimilation into whiteness. I considered the implications of the bootstrap mentality and how at times, it is easier to fall into a mindless agreement with capitalism and whiteness than to be at odds with them. As I collected my thoughts throughout these meditations, I began to visualize the conversations and objects commonly found in dialogue with elders in our communities. A pot of tea is a communal object, one of warmth and of togetherness. The act of holding space as a community for both the recognition of trauma and strife through immigration, while also the goal of such conversation to dismantle the harmful systems that our community has internalized and maintained. I was deeply inspired and informed by the works of Julie Mehretu and Lorna Simpson in the medium that I chose, as well as the ways in which both artists reflect on and hold space. I utilize graphite on canvas for a broad range of values, in addition to capture the feeling of youth and early education. I believe that the Southeast Asian community’s youngest generation is ready to witness and dismantle the harmful systems that we benefit from.

Ahnali Tran is a mixed Asian American artist residing in North Minneapolis. She works primarily with oil paint and ink to create works concerning immigration, identity, and politics. Her family owns and operates the Dow Art Gallery, which informs her passion for challenging and dismantling the colonial systems of galleries and museums. Tran utilizes her mixed race experience as a lens throughout her work and practice, from her artistic practice to her community activism.

This project is commissioned content for a digital campaign organized by Youthprise in partnership with Juxtaposition Arts, Brooklyn Bridge Alliance, and The SEAD Project. The campaign exists to value and amplify young folks: perspectives, creativity, and thought leadership. We are promoting youth voice as we believe there is wisdom and hope needed to address the dual pandemics of Racism and COVID-19 and their unique impacts on BIPOC communities in Minnesota. Learn more at: youthprise.org/youthpowerrising.